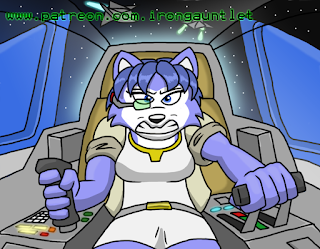 Hello again peoples! Happy 2018. Yes, I know I'm late to the party - I did say last time that my blog output may drop off - I've been insanely busy in my current job in addition to juggling my personal projects.

Which brings me to this - it's some concept art I decided to whip up for my next entry in my Starfox animations. A little more ambitious than what I've done before - I intend to include some 3D animated spaceship combat (pending my 3D modelling skills).

However it may be some time before I can get to this. The current animation I'm working on is the next episode in my 'Doom Guy' series and my actual animation job I'm employed in takes up a lot of my time to allow me to do this.

So why not support my Patreon? (yeah, yeah I know - shameless shilling) All I want to do is work on my own creations and with your support I'd be less reliant on regular work and have more time to chase my dreams. That's a good thing, right?

Posted by Peter Harman at 2:22 AM No comments: 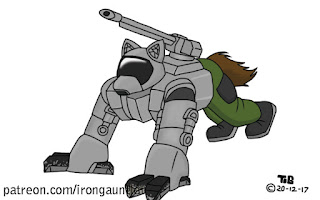 While the intention of Keane was to be a powerful melee fighter, it wasn't long before his lack of ranged firepower limited his usefulness. Naturally the solution was to give him a gun. Of course, with his claw hands he couldn't wield a conventional firearm, so the next logical step was to give him a large calibre back-mounted cannon. Shortly afterwards came his armour and helmet - which contains a head up display linked to the gun, which Keane cybernetically controls in the same way as his arms - essentially the gun acts as an extra appendage. The ears on the helmet also contain audio dampeners so he doesn't deafen himself when firing. 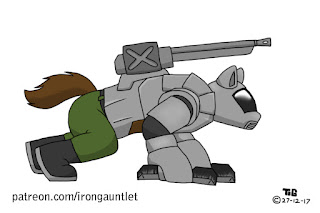 I'm still um-ing and ah-ing about the design. I haven't decided whether to give Keane one gun or a double barreled gun and I'm still figuring out how Keane can reload it during battle, or even if I should give the gun(s) a large enough magazine to last the entirety of your average engagement. 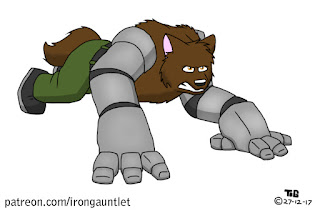 Same goes with the design of his claws - the design isn't 100% final there either. I like the 'jaws of life' style design, but originally the blades were longer which would have presented difficulties when Keane was to run on all fours. I tried the idea of more 'stubby' fingers (as seen left), but wasn't sold on the idea and went back to the claws, this time separating them into lower and upper parts, not only giving Keane better articulation, but the upper section retracts, shortening the overall length and providing a partial solution to the running problem. But like I said, I still haven't settled on a design and things could very well change in future.

And with that, completes my 12 month showcase of the main characters for my Dogs Of War series. Thank you all who bothered to look my characters during this time. From next year, there may be fewer posts on this blog now that I'm not tied to a theme which pressures me to upload posts, but will also try to spread my art around my Twitter, Tumblr, Patreon, Youtube and various other online platforms to try and get more exposure.
Posted by Peter Harman at 10:02 PM No comments: 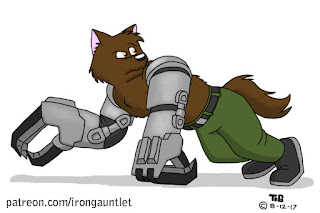 Well, it's December and here we reach the final character in this Dogs Of War nonsense I've been doing over the course of the year.

This is Keane and he is a bastard. No, I don't mean he's a bastard personality-wise, but instead is a bastard to animate. My animation style tends to be more 'cut out' - essentially a bunch of objects that make up each character that I push around when I animate. Not your traditional 'redraw every frame' style. Look, just go to my YouTube channel (TheIronGauntlet) and see my stuff for yourself.

All those rigid edges mean a lot of redrawing if I want to see smooth movement in my animation. Keane alone is the reason I would consider Dogs Of War to be a 3d animated series rather than 2d.

Keane is another character that doesn't (yet) have a surname. Not only that, but I also haven't decided what nationality he should be or even what dog breed he is. Very much a blank slate right now, though recently I have been thinking of making him Eastern European or something.

Keane is a powerful bruiser of a character, his origin being that he had been critically wounded and had his arms replaced with these oversized claws you see here.
The inspiration for Keane came from the Warhammer 40k table top minatures games, specifically from the Inquisitor line of gaming (is that still a thing or did they discontinue it?). Some of the characters I saw used in battle reports were crazed power-claw wielding gladiators and I thought it would be interesting to throw a cybernetic melee warrior into the mix. He did start off as a crazed, unhinged and unstable fighter, but over time I changed him to be more refined and intelligent. He actually has a soft side and his powerful claws become a liability more than anything.
Posted by Peter Harman at 6:09 AM No comments: 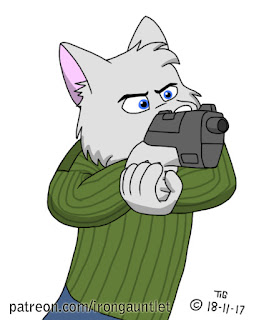 I feel that Damocles is somewhat underrated. He's actually once of the most skilled characters in Dogs Of War and I don't give him enough credit for his talents. As a wolf he's quite strong and powerful, he's clever with mechanics - almost on par with Peter Edgewood (but minus the emotional baggage) and he has a wide range of skill with multiple weapon types like Sledge, but is better all round. He also has good leadership skills. if he was in charge of the bad guys rather than Mitch Haettennschweiler, they'd probably win a lot more. 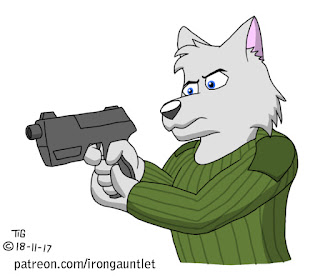 While not intentional, I often found myself writing Damocles at odds with Mitch's leadership, when I was working on scripts. Never to the point of arguing or mutiny, but rather questioning his decisions from time to time. I sometimes feel Damocles would be a better leader than Mitch and this slight tension between the two was an interesting development that occurred. Like I said in Veronica's posts, I tend to let the character personalities develop organically on their own without trying to force anything.

Posted by Peter Harman at 5:31 AM No comments: 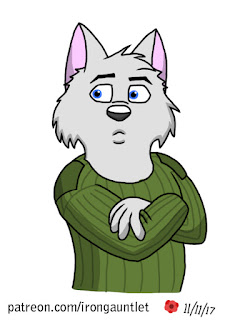 This is Damocles Swenorstiki. He is a wolf hailing from Sweden, so I would like to start by apologising to all Swedish people as his surname was completely made up as something sounding vaguely Scandinavian. One day I'll do some actual research into Swedish surnames, so sorry for this insensitive glossing over of your language and culture.

To begin with I named him 'Rondache', which is named after a defensive shield I saw in the PC game Diablo 2, but later changed it to Damocles. Yes, I know 'Damocles' isn't Swedish either, but it's a name I like and my excuse is that he was conceived while his parents were holidaying in Greece - they chose 'Damocles' as a homage. 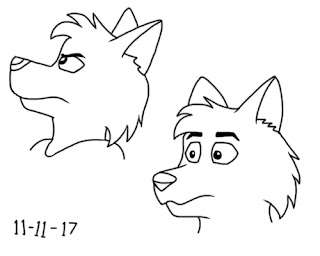 That blob of red next to the date in the first pic is a poppy flower. It is Remembrance Day after all.

Posted by Peter Harman at 2:28 AM No comments: 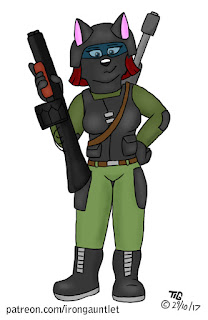 Veronica has the widest range of weapon specialisation out of all the characters. She is proficient in three weapon types, whereas the other characters tend to deal with two types (Sledge does employ a wider range, but he is more of a jack-of-all-trades). While she primarily uses a sniper rifle, Veronica is also highly competent with her custom shotgun and sub machine gun as well, giving her combat options for short, medium and long range.

The design and function of her sniper rifle and SMG are fairly rudimentary, but I wanted her shotgun to be something special. The point of the bad guy doggies is to combat a team that wear heavy body armour. I wanted her shotgun to be able to fire munitions that poses a threat to armour (armour-piercing solid slugs), but also had the ability to employ standard buckshot for the times the team fight more squishy targets.

I put a lot of thought into the functionality of her shotgun. Some may say too much, but I like to be creative. Veronica's shotgun is a modified version of the standard issue shotgun the main army use in Dogs Of War. It employs an 'over and under' barrel layout (ie two barrels stacked vertically) fed by a special drum magazine which contains a smaller drum encased by a larger one. The outer drum contains armour piercing  slug rounds, while the inner drum contains regular buckshot. I could go into fine detail as to how the firing mechanism works, particularly how the inner and outer drums are independently operated, but that may be too technical and I'd be getting away from the point of these blog posts focusing on the characters.
Posted by Peter Harman at 8:08 PM No comments: 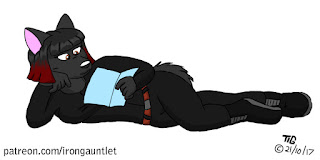 To begin with, Veronica was named 'Sharon', but was later changed when I felt I had too many characters with names starting with 'S' (In addition to 'Stylene' and 'Sledge', I also had 'Scott' and 'Scope' - a couple of discontinued characters). I had also played around with the idea of her surname being 'Black' but given her appearance it felt too literal. Unlike most of the other characters, I didn't really have a  dog breed in mind when I designed Veronica. Maybe a kelpie, but to be honest it's up in the air.

For this picture I've used my new Cintiq drawing tablet. A Cintiq is something I've wanted to get my hands on for a while. Most of the drawings I've done have been created with a mouse. Not ideal, but it got the job done. I do have a regular Wacom tablet, but the reason I don't use it much is that I do my creative work on my laptop - my work space is nomadic and having more devices plugged in makes it more awkward when I'm moving things around (not that having the Cintiq solves this issue). I like the Cintiqs as you're drawing directly onto the screen - it's more tactile and I can create drawings more quickly. With a Wacom, the angle you have the tablet set up can be critical. I find there can be a slight mental disconnect between the angle you might think you're drawing and what appears on the work space. Still a bit of a teething process with the Cintiq, mind you. The line work may be faster and looser, but has ended up more 'sketchy' than I'd like. The other issue is that the screen on the Cintiq isn't as bright as on my computer monitor so when it came to colouring, spotting the gaps wasn't as easy. Though colouring such a dark character may not have helped.

Posted by Peter Harman at 4:47 AM No comments:

Peter Harman
Erm, er... well I'm interested in animation and have worked on several productions. As much fun as it is animating, I hope that I'll end up in the production side of things.